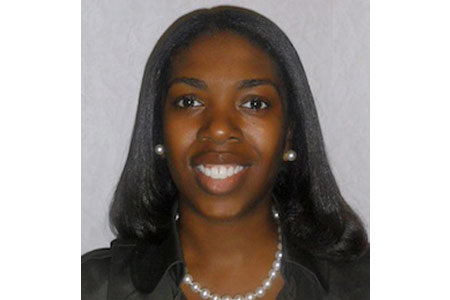 Naima Brown is one of Santa Fe’s most popular and well-respected professors. She begins a one-year appointment as interim Vice President for Student Affairs on May 1.

Naima Brown, 39, was named after the John Coltrane song, “Naima.”

“It was my father’s favorite song,” she said.

She grew up in Philadelphia’s inner city.

“I was bussed to an experimental school, Fitler Academics Plus, that focused on preparing students for college at an early age. Students were chosen for the school from all over the city. We were a diverse group,” Naima recalls.

Naima got in because her sister, Michelle Jackson, was in the very first class of first graders, and the school took siblings.

Their mom, Pauline Brown, had two kids during her teenage years. Pauline started to volunteer at Head Start where her kids attended pre-school, and eventually started working there. She recognized the value of education for her own children.

“She walked us to the bus stop every day and waited for the bus to come at 7:05 a.m. If we’d gone to the neighborhood school, she could have slept in,” Naima said.

Naima’s commute was over 90 minutes each way. It was worth it.

Naima went to the city’s top public high school, Central High. All the way through school, her mom checked her homework every night. In 1990, Naima enrolled at Florida A&M University – the first person in her family to attend a university.

Leaving Philadelphia was marked by sadness for Naima. Her father, Marvin Brown, was shot dead in December of her senior year, two days after Naima turned 17.

“I definitely wanted to get away from the crime. My father was the 438th person murdered that year. College was a ticket out,” she recalled.

She was heavily recruited and got offers from schools in the northeast – including a full scholarship to Penn State – but she wanted to get away. She went to the library to research colleges.

She chose Florida A&M because it was the least expensive and it was in Florida’s capital. She liked the idea of moving to what she thought would be a big city.

Pauline sold dinners to people in their neighborhood every weekend for several months to raise money to make the trip to Tallahassee.

Naima always wanted to teach, but people told her, “don’t go into teaching, you won’t make any money,” so she decided to major in health administration.  But her first college-level sociology class was a game changer.

“I realized, ‘I think like this.’ These were the answers to the questions I was asking. I read the textbook like a novel,” she recalled.

Her professor, Dr. Melvin Barber, “totally took me under his wing.” When she learned sociologists create research and teach, even better. She could finally pursue her passion for teaching.

She was interested in family violence, how observing violence in a couple’s relationship impacted teens, and partner-to-partner violence.

Naima presented her undergraduate research at the American Sociological Association’s (ASA) conference and was offered an ASA minority fellowship for graduate school. During all the years she was at Florida A&M, she paid out-of-state tuition and didn’t apply for a single scholarship. At the time, she didn’t realize the distinction between in-state and out-of-state tuition, and she took the maximum amount of student loan dollars, a mistake that she encourages her students to avoid.

She established Florida residency before she came to Gainesville in 1995. She finished her master’s degree at the University of Florida in 1997. She was the first person in her cohort to publish a paper; it appeared in the Journal of Family Issues. The late Dr. Felix Berardo chaired her committee. Naima’s research explored family secrets.

“Dr. Berardo really invested in me. I was his last doctoral student before he retired. I was his finale,” she said. “He helped me deal with what I call ‘the imposter syndrome.’ He’d say, ‘yes, you do deserve to be here.’ And he traveled a lot, for work and recreation, and would bring me back interesting souvenirs from his trips. That got me interested in international education.”

Her dissertation in 2002 was titled: “Health Beliefs as Predictors of Parent-Teen Communication About Pregnancy, Sexually Transmitted Diseases, Sexual Respect and Sexual Morality.”

She taught as a TA at UF and as an adjunct at Santa Fe in the late ‘90s. In 2000, she won the UF teaching award for graduate students. [The day the observers came to watch her class, she found out her grandmother had died just a couple of hours before she stood up to teach.]  She officially joined Santa Fe’s faculty later that year.

“I really feel like teaching is my calling,” she said.

Her object is not to “fill” her students up and have them spit back the info. She wants them to apply it to their lives.

“I want them to do something with it,” she explains. “Apply it in a different form. We can talk about whatever is going on in their lives from a sociological perspective, and that, to me, is exciting.”

She’s the advisor for SF’s chapter of Phi Theta Kappa, the international honor society for two-year colleges. The group recently won the Florida College Project Award for their work with SF’s Pathways to Persistence Program.

“I want to invest in these students as they develop leadership and problem solving skills,” she said. “We have our trials and tribulations, but it’s making an impact on the students that really drives me.”

She’s been instrumental in internationalizing SF’s curriculum, creating curriculum that she shares with faculty, including literature reviews and lecture notes.

She will lead a study-abroad  trip to Sweden from May 20 to 30. She will also continue teaching her 8 a.m. Social Problems class in the fall; it’s the class that’s been connected by Skype to a class in Sweden since 2007.

Someday, she’d like to apply for a Fulbright and go abroad to study and teach, but for now, she’s fully embedded in Gainesville. She’s on the board of directors at the STAR Center Children’s Theatre and the Gainesville HIPPY program (Home Instruction for Parents of Preschool Youngsters).

In terms of her new work in Student Affairs, she said it will make her feel effective when she can do something to help students.

“It will give me the opportunity to have a greater or stronger impact,” she said.

She’s spent the spring learning about the different student affairs programs, reading program reviews, meeting with staff, and “getting as much of a feel as I can before I step into the position. I’ve been gathering information, observing and studying.”

“I see this appointment as a huge opportunity for service to the college in a way that will allow me make a positive impact.  I’m going in with one thing in mind and that is, what is going to be in the best interest of our students? How can we improve upon the top-notch services that we already provide to our students? In my view, my new position means that I have the chance to make a significant difference in the lives of our students on a grand scale. And I am fired up about that!”

When she’s not working, she enjoys playing Scrabble. She started a Scrabble Club called Scrabble Lovers of Gainesville Florida. They meet every other Tuesday from 5:30 to 8:30 p.m. at the Tower Road Library to play Scrabble.

“I am a very competitive player and I only play to win,” she said.

She’s a member of the Gainesville Ladies Book Club that meets twice a month to discuss fiction over dinner. She enjoys reading international novels, “novels that will take me to another place and allow me to experience that place. I like a good story that crosses over generations, that portrays differences in class and society.”

She enjoys tracing her family history.

“I have traced both my mother and father’s side back into slavery in Georgia. It has been a great way to meet relatives and to literally see just how far our family has progressed over time,” she said.

“ I like to chronicle my adventures through photographs and share them with others. I typically create narrated slide shows for every place that I visit,” she said.

And she loves to attend live performances, especially theater.

Naima and Pauline take a cruise every Christmas. They’ve been to the Bahamas, Cayman Islands, Jamaica and Cozumel.

“This year, we’re inviting the entire family,” she said.

Naima is committed to her church, Compassionate Outreach Ministries, which is down the street from Eastside High School.

“I grew up without religion. This is the first church that I visited as an adult. I used to think Christians had been brainwashed. But then I got a Bible and started reading it, and I really related to it, and I was moved by it. My Christianity gives me comfort, peace, confidence and direction,” she said.

Big picture, she hopes that her tenure in Student Affairs will mean “more people are coming to work and enjoying what they do for our students and for our community.”

She wants people to feel like, I did something fantastic today. She also hopes that she will be able to provide staff with opportunities to be creative and innovative.