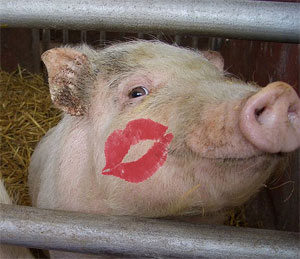 Who Will Kiss the Pig at Florida’s Most Fun Weekend? Kiss the Pig, a big hit at last year’s SF Boots ‘n BBQ fundraiser, is back again and it has morphed into a brand new format. The contest this year is  between three civic groups, each represented by one of their members who is pledged to do the porky pucker: Altrusa, by Sylvia Reddish; Rotary, by Jeff Oody; and Kiwanis, by Steve Denmark.

But the trick this year is not to win! The pig will be kissed by whoever’s group raises the smallest amount of donations for the SF scholarship fund. Every vote goes to help someone avoid kissing the pig.

So come on out and vote — as often as possible! Votes are $1 apiece and easy to cast. Stop in at one of these voting sites in Starke: Capital City Bank, Western Steer Family Steak, Chrissy’s Old Meeting House Café, Bradford County Tax Collector’s office, and Denmark Furniture/Sears. Or cast your votes online with a minimum online donation of $5. All proceeds go to fund SF scholarships for Bradford County students.

The pig smooch takes place right before the 5 p.m. awards ceremony on Saturday, May 19, Boots ‘n BBQ’s closing day. (Don’t be concerned — all due care and respect are given to the pig, a local young porker.)

So watch the voting tallies online. If the candidate you want to save from kissing the pig is running behind, you’ll be able to rescue him or her with a last minute vote until the polls close at the event on Saturday.