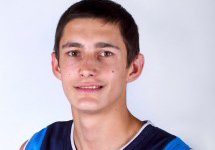 Gainesville, FL – Santa Fe freshman Jere Vucica recently signed a letter of intent with the University of North Alabama, SF coach Chris Mowry announced. Vucica, originally from Split, Croatia, did not compete for the Saints during the 2011-12 season and will have four years of eligibility remaining.

“We are very fortunate to sign a player like Jere and have him for four years,” said UNA head coach Bobby Champagne. “He will be a great fit for us both as a player and a student.”

North Alabama is a NCAA Division II school located in Florence, AL. The Lions compete in the Gulf South Conference and finished the 2011-12 season with a 15-12 overall mark and were 7-7 in the GSC under Coach Champagne.

“Jere has played basketball and been around the game all of his life,” Champagne added. “He has several years of experience playing for national and junior teams in Croatia and Belgium. This past season he was able to gain some weight and strength and become accustomed to the style of basketball played in America. His athleticism, versatility and overall skill level will certainly help our team.”