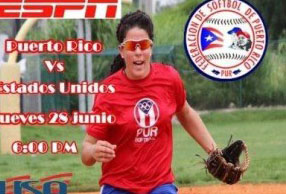 Claudio, a veteran of international competition, will be making her third appearance for the Puerto Rican National Team. She previously played in the Pan American Games in October of 2011 and the ISF Junior Women’s Worlds in December 2011.

Six of the best teams in the world will be competing in the five day tournament, led by favorites the United States. Making up the rest of the field are Puerto Rico, Australia, Brazil, Canada, and Netherlands.

Puerto Rico opens the tournament against Brazil at 10:00 AM EST on June 28. Later in the same day they will battle the United States at 7:00 PM EST. This game can be watched live on ESPN2 or via streaming video on www.ESPN3.com.

Every game of the tournament can be watched live at http://asa.sportzcast.tv and all United States games are available on either ESPN or ESPN2 and ESPN3.com

For a full schedule and viewing information, please visit the following link: http://usasoftball.com/events.asp?uid=6886