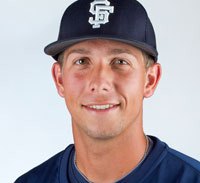 Pardo, a transfer to SF from Appalachian State University, played one season for the Saints and finished with a 2-2 record, 3.16 ERA and 37 strikeouts in 36.2 innings pitched. In limited action at the plate he hit .188 with two homeruns and 11 RBI and provided stellar play in the field, typically being called upon as a defensive replacement at first base late in games. He was being recruited primarily as a pitcher by the USF Bulls.

The University of South Florida is coached by Lelo Prado and went 38-22 overall and 17-10 in the Big East Conference. They came up just short of an NCAA Tournament berth, dropping the Big East championship game to St. John’s University.

Mackey, a sophomore transfer from Gulf Coast CC, sat out the 2012 season and received a redshirt. He will have three years of eligibility at USC-Upstate.

The Spartans, coached by Matt Fincher, finished a successful 2012 33-20 overall and 16-10 in the Atlantic Sun Conference.

The two most recent signees give the SF Saints baseball program 12 who have moved on to upper division schools and two (Mallex Smith and Tim Remes) who signed a professional baseball contract.