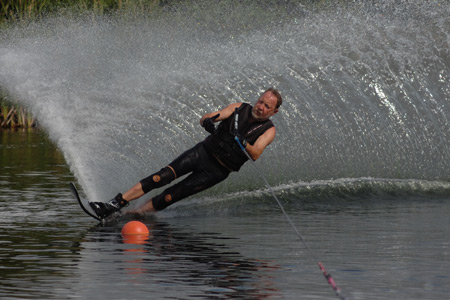 Adjunct Fine Arts Music professor Leon Larson does his best to stay active, and that includes competing in the sport he loves — water skiing.

Next weekend, Larson, ranked No. 7 in the nation for his age group, will be among the participants at the American Water Ski Association Southern Regional Championships at Twin Oaks Lakes in Paducah, Ky. Mostly known in the water ski community as a respective international official for the sport, Larson loves to compete on the water as well.

That combination, as an outstanding official as well as competitor for more than 40 years, landed him along with three other inductees into the Florida Water Ski Federation Hall of Fame on July 14 in Polk City.

“I have been involved in water skiing a little over 40 years in competition,” Larson said. “I continue because it is just the love of the sport. Being a official and being involved also keeps me going as you go to tournaments all over. It’s hard sometimes to officiate because you want to be out there competing.

“Part of the honor I received had to do with my years as an official, and my involvement with safety in the sport as well as the international environment committee chairman for both water ski and wakeboard. I have officiated close to 600 tournaments over the years.”

Larson said he learned how to ski while growing up in New Jersey and loved the sport so much he moved to Florida. He also stays active as a longtime member at Gainesville Health and Fitness.

“I was one of the original members,” he said. “I have been there since 1977 or 1978, when Joe (Cirulli) first opened in Creekside Mall. I have a pretty set routine and try to train at least twice a week.”

Larson has also been an instructor for Santa Fe College Community Education classes in hand drumming for the last 15 years and an adjunct professor for the past five years. He has conducted hand drumming workshops throughout the state.

He is also preparing to compete in the Water Ski National Championships Aug. 14-18 in West Palm Beach.

“There are usually about 20-25 competitors in my age group at nationals, and about seven to eight at regionals,” Larson said. “One of these days, I’m going to win at nationals.”

He is hopeful by 2020, the Olympics will pick up the sport of cable wake-boarding, which has become very popular.

“It is on the short list for consideration,” he said. “We are making some progress there.”

– From The Gainesville Sun