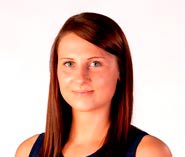 Gainesville, FL – The Santa Fe Saints lost a heart breaker to Daytona State College on Wednesday evening 84-80 in overtime, dropping SF to 12-8 overall and 0-2 in Mid-Florida Conference play.  The Saints led by three with five seconds to play but a last second three point shot by Abigail Asoro tied the game, sending it to the extra frame.

Asoro picked up where she left off in regulation, scoring eight points in the overtime period to lead the Falcons to victory.  She finished with a game high 38 points.

“We’ve dug ourselves in to a hole in conference play,” said SF Coach Chanda Stebbins.  “We have to stay focused, work harder and get a win Saturday.”

Paulina Zaveckiate provided a bright spot for the Saints.  She set a NJCAA Division I record with 32 rebounds, smashing the previous record of 27 established by Dennie Young of Johnson County CC in 1993 against Lebette College (the NJCAA records are 1993-present).  Zaveckaite now has 322 rebounds on the season, leading the nation.

“I was very impressed with Paulina’s effort tonight,” said Stebbins.  “She really stepped up and controlled the glass for us.  Thirty plus rebounds is very tough to do.”

The Saints were flat in the early going, falling behind 10-0 in the opening minutes of the game.  They fought back and tied the score at 16-16 with 11:27 and led by as many as three in the opening 20 minutes but a late flurry by the Falcons put them ahead 40-33 at the half.

Daytona controlled much of the second half and led by nine with 11:21 to go.  The rest of the half was a game of runs as the Saints answered, scoring 15 straight to pull ahead 60-56.  The Falcons decided one good run deserved another and ran off 11 straight points to move back ahead 67-60.  SF bounced right back with a 12-2 run and led by three with just seconds to go before the Asoro three that sent the game in to overtime.

“Asoro is a great player,” said Stebbins.  “But this is the second game in a row we’ve allowed one player to take over.  We need to improve defensively, help better and not let one player beat us.”

Zaveckiate finished with 15 points to go with her 32 rebounds, Tiara Thompson had 18 points, Monique Bunk had 15, Jaquasha Sesler scored 12 and Lonna turner had 10.

The Saints will look to get back on the right track when the College of Central Florida visits Gainesville on Saturday for a 2:00 PM tip.