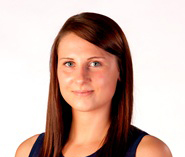 Tampa, FL – The Santa Fe Saints trailed for a majority of their Mid-Florida Conference tilt against Hillsborough CC Saturday afternoon in Tampa, but stepped up when it mattered and pulled out the 90-85 victory to pull back to .500 in MFC play.  The win moves SF to 14-8 overall and 2-2 in conference.

“We did a nice job closing out the game and played very well in the last few minutes,” said SF Coach Chanda Stebbins.  “Paulina did a very nice job down low.  She fought hard for 40 minutes and gave us everything she had.”

Paulina Zaveckaite led the way for the Saints scoring 27 points on 10-of-11 shooting and the nation’s leading rebounder also pulled down 15 rebounds.

The Hawks controlled the action throughout the first half leading by as many as 13 and took a 44-39 lead into the break.

Santa Fe chipped away at the lead in the second half but the Hawks continued to have an answer until the last three minutes of the game. The Saints finally grabbed a lead and held on when HCC missed two three pointers that would have tied the game and SF made their free throws to seal the win.

The other Santa Fe players joined Zaveckaite in double figures.  Tiara Thompson scored 14 despite shooting just 4-of-17 from the field, Monique Bunk had 13 points and Tay Couch scored 10.

The Saints return to action at home on Wednesday, January 23 against Florida State College-Jacksonville at 6:00 PM