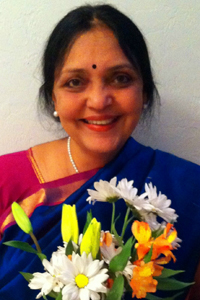 Santa Fe College, with support from the 2012-2014 federal Title VIA Task Force “Opening Doors to Asia” grant and the Department of Humanities and Foreign Languages, announces a major guest lecture, “From Funan to Florida: Temples and Performance in Global Hindu Traditions,” by an internationally renowned scholar on Asian religion and studies.

All students, faculty, staff and community members are invited to this free event, which will take place from 4-5:30 p.m. Thursday, March 21 in WA-104. A question and answer session and reception will follow.

Dr. Vasudha Narayanan is a Distinguished Professor in the College of Liberal Arts and Sciences’ Department of Religion and director of the Center for the Study of Hindu Traditions (CHiTra) at the University of Florida. She is a past president (2001-2002) of the American Academy of Religion and the author or editor of seven books and over 100 articles, book chapters and encyclopedia entries. Her research has been supported by grants and fellowships from several organizations including the Center for Khmer Studies, the ACLS American Council of Learned Societies, the John Simon Guggenheim Memorial Foundation, the National Endowment for Humanities (1985, 1987, 1989-90 and 1998-99), the American Institute of Indian Studies/Smithsonian and the Social Science Research Council. Narayanan was educated in India at the University of Madras and the University of Mumbai (formerly known as the University of Bombay) and also at Harvard University.

The next Title VIA guest lecture is “Why Be an Internationalist?: The Importance of International Competence in a Flat World” by Dr. David J. Sammons, dean of the International Center at UF. It takes place 4-5:30 p.m. Thursday, April 4 in WA-104