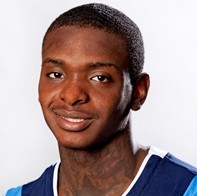 Reggie Hart and the Saints Knock Off #1 Daytona State in Overtime, 81-74

Gainesville, FL – The Santa Fe Saints won an overtime thriller in Daytona on Wednesday evening, upsetting the FCSAA #1/NJCAA #19 Daytona State Falcons 81-74, denying DSC the chance to clinch the Mid-Florida Conference championship.  The Saints (20-8, 4-4 MFC) postseason hopes are still alive, but they will have to wait until Saturday to see how things shake out.

Reggie Hart turned in a career performance with 29 points on 11-of-15 shooting, including 3-for-3 from the three point line.

Santa Fe controlled the early part of the game and led 31-21 with two minutes to play in the first half.  The Falcons closed the period on a 9-0 run and made it just a 31-30 SF advantage heading into halftime.

In the second half it was back and forth the entire way and the Saints held a three point lead with under thirty seconds to play.  Daytona came up big when they needed it, nailing a three pointer to tie the score up with 18 seconds remaining.  SF held the ball for the final shot but were unable to win it in regulation.

In the overtime period Santa Fe hit numerous clutch shots and made their free throws down the stretch for the seven point win.

“This was a great win against a very good team,” said Mowry.  “I’m proud of our effort and I’m proud of how we played after they came back on us a few times.  We didn’t get discouraged and continued to play with intensity all 45 minutes.”

“Salim gave us great minutes and Andre was excellent on both ends of the floor,” Mowry commented.

The Saints will play their final regular season game of the season on Saturday, February 22 at home against Florida State College-Jacksonville at 2:00 PM.