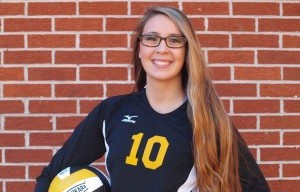 Fuchs, a 2013 Gainesville Sun first team all-area performer, led Buchholz in kills and blocks while being named Most Valuable Player. In addition to all-area honors, she was named to the prestigious Gatortown Classic All-Tournament teams in both 2012 and 2013.  As a testament to her academic accomplishments, Julie was honored by Gainesville’s TV20 as a Scholar Athlete of the Week last fall.

“I am thrilled that Julie will be in our first class,” said Cheronis. “She is not only a dominant presence on the right side, but she is also a terrific student ranking in the top 10 percent of her class at Buchholz. I love the fact that local players are taking the plunge to join a brand new program. Julie exemplifies all of the positives of being a student-athlete. She will be a tremendous asset both on and off the court as we begin our first season this fall.”

Jordan comes to Santa Fe College from Pace High School in Pensacola. Pace finished the 2013 season ranked 9th in the state in 6A competition with a 21-6 overall record and advanced to the regional quarter finals in the FHSAA tournament. Emili finished with 342 kills, 91 aces, 23 total blocks, 206 digs while hitting a blistering .345.

Jordan was named Most Valuable Player for Pace and named 1st team all-area by the Pensacola News Journal. She was also MVP of the Peach Tree Classic, Mosley, Northview and Panhandle Classic Tournaments while leading the entire area in total kills.

“I am really excited to have Emili join the new Santa Fe volleyball family,” Cheronis commented.  “Her versatility is going to give us a lot of flexibility offensively and defensively. Emili is also an excellent student and plans to pursue a career in nursing which has its own demands. That tells you a lot about the kind of character she brings to the program.”

Walker will join SF after leading Middleburg High School to the 6A Final Four as the only senior on the squad.  She was the team captain for both her high school and club teams and excels in the classroom as well. She won the Middleburg High School Triple Threat Award for leadership, skill, and work ethic as well as numerous other awards throughout her high school career.

“Haley comes to us from one of the top high school programs in the state,” said Cheronis.  “Her high school coach, Carrie Prewitt, always has her players ready to play at the next level. Haley will come to us already trained in the middle which will help our team out immensely. She is jet quick in the middle and will give opposing middle blockers fits trying to defend her attack”.