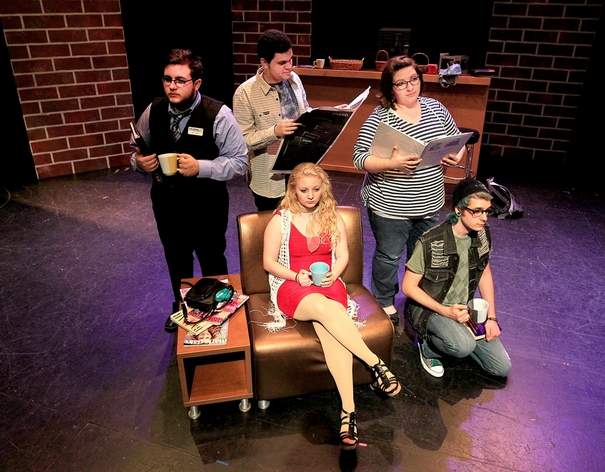 Bullying is the central theme of “Sticks & Stones,” a performance by theatre students at Santa Fe College at 7:30 p.m. Thursday-Saturday, April 17-19, in the Building E Auditorium at the Northwest Campus. The performance is free; however, the students request donations of personal items (toothpaste, deodorant, shaving cream, etc.) to be contributed to the TREE (The Replenishment of Everyday Essentials) program of the Gainesville Area AIDS Project (GAAP).

By special request from the Alachua County School Board, “Sticks & Stones” was also be performed for an audience of middle school students on April 11.

Theatre Professor Terry Klenk is directing “Sticks & Stones,” which he describes as “a theatrical experience addressing social change.” The play’s title is derived from the children’s rhyme, “Sticks and stones may break my bones/But names will never hurt me.”

“The positive message is that there is support to live through bullying,” Klenk explained, “and the audience gets a sense that even though bullying happened in the past, we can get beyond it.”

The one-act work evolved from an Honors Class in Dramatic Literature in which 10 students were challenged to create a script about bullying. After researching real bullying situations that were described on the Internet, students combined those stories to create five different adult characters who survive bullying to reflect on their experiences that include:

“This has been a year-long exploration by different groups of theatre students,” Klenk explained. “In putting this work together, we discovered a great deal of interest in bullying, not only in Santa Fe’s students but also throughout the county. The School Board of Alachua County asked us to present ‘Sticks & Stones’ to middle school students because the local schools want to start a dialogue about bullying.”