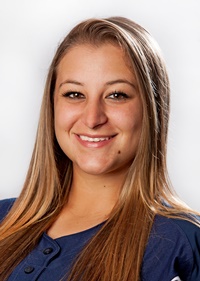 Gainesville, FL – Santa Fe College’s Maddy Peres is this week’s NJCAA Region 8/FCSAA Softball Pitcher of the Week. Peres, a freshman from Cape Coral, Fla., went 3-0 with a 1.31 ERA in three appearances during the voting period.

She picked up the win in both games of a doubleheader against Daytona State on April 17, going the distance in a 2-1, nine-inning victory in the opener then tossing two perfect innings in relief in the nightcap, a 3-2 win for the Saints. Combined, she worked 11 innings and allowed only five hits and one walk and struck out 11.

Two days later, she helped Santa Fe clinch the Mid-Florida Conference Championship with a complete-game effort in game one against Lake-Sumter State. For the week, Peres worked 16 innings and allowed ten hits, three runs (all earned) and two walks and struck out 17.

This is Peres second time winning Pitcher of the Week.  She also won the award on March 11.