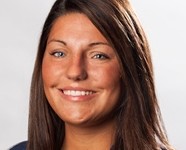 Pensacola, FL – The Santa Fe Saints fell behind early against Indian River State College and were never able to recover as they were eliminated from the FCSAA State Tournament by the Pioneers 5-1.  IRSC will now move on to play the College of Central Florida in the Atlantic District final.  The Mid-Florida Conference champion Saints end their season with a 36-23 record.

Santa Fe managed just two hits against the tough Indian River pitching.  Erin Marsh broke up the no hitter in the fifth with an RBI single to cut the lead to 5-1.  IRSC built their five run lead with one in the first, three in the second, and one in the fourth.

Maddy Peres started the game in the circle and took the loss for SF.  Ashley Chapman pitched five innings, Ashley Rey pitched to one batter, and Kalsey Jefferson tossed 0.2 innings.

Rachel Hoeft had the only other hit for Santa Fe in the sixth when she blasted a deep single to deep right center field.