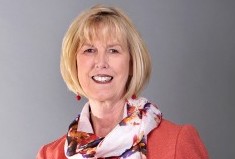 Please join us to celebrate Bennye Alligood’s 35 years of service to Santa Fe College from 2:30-4 p.m. Friday, October 10, 2014, in the President’s Lobby at the Northwest Campus.

When Bennye Alligood leaves campus on October 10, 2014—her last official working day before her retirement—she will take with her 35 years of college history and a treasure trove of memories, stories and experiences. Those stories reflect the evolution of Santa Fe College from a school that many people doubted would succeed to being named one of the Aspen Institute’s top 10 colleges in the country.

“When Santa Fe was new, a lot of the locals said, ‘You’ll never make it,’” Alligood remembered. “I heard that from students, staff and faculty. People thought Santa Fe was too close to the University of Florida and that we wouldn’t be able to attract enough students.” Due in large part to the strong work ethic and student-centered philosophy of Alligood and others like her, those early doubters were proved wrong. “Nobody thought that Santa Fe was going to explode like it did!” she added. “Our word was ‘innovative’ and our foundation was the question, ‘How can we help students learn?’” Alligood smiled as she remembered her early days at SF. “We weren’t afraid to try anything. We had a lot of people who thought outside the box. We weren’t afraid to make mistakes and we weren’t afraid to have fun! After all these years, being student-centered is still second nature.”

Alligood’s career path parallels the growth of the college. In 1967, she was one of about 1,000 incoming students when she was hired to work part time to deliver audio-visual equipment to classrooms. She retires as Associate Vice President for Educational Centers with enrollment at approximately 24,000 students.

Between those two career bookends, “I was Miss Miscellaneous,” Alligood laughed. She went from being the first secretary to faculty members to supervising unit secretaries, coordinating the class schedule and serving as assistant to the West Campus House Director. After a 10-year absence when her husband was transferred to Georgia, Alligood returned to SF to work for one year as an accountant before being named Administrative Assistant to Vice President for Academic Affairs Dr. Robert Myers.

Alligood’s value to the college grew with each successive job:  Director of Human Resources, Assistant to the President, Associate Vice President for College and Community Relations, Interim Vice President for Academic Affairs and her current job as Associate VP for Educational Centers. She has worked for all four of Santa Fe College’s presidents:  Joseph Fordyce, Alan Robertson, Larry Tyree and Jackson Sasser.

Bob Myers was Alligood’s primary mentor and he encouraged her to move from Academic Affairs into Human Resources. She cites being Director of Human Resources as her favorite job. “I loved it, and the thing I’m proudest of is to have been able to hire so many wonderful, talented people and place the right people in the right jobs,” she said. “Every job I’ve had since that one has had a human resources component.” She names Guy York, Tom Delaino, Kim Kendall and Sasser as additional SF mentors. Asked how the college has changed over the years, Alligood mentioned growth in size and number of centers as well as policy changes and changes in the general education curriculum. She credits early faculty members with creating the concept of units where teachers of different disciplines share office space. “Faculty and students love the unit concept, where they can share conversations about such things as how math influences both science and art,” she said.

Santa Fe College has not been the only organization to benefit from Alligood’s talents. As a long-term board member, she helped YMCA reach out to children in the community. Through Altrusa, she has been actively involved in projects that help women gain needed education and in projects that help school-age children. She has mentored students, employees and faculty members.

In recognition of her years of service to the college and community, Alligood was chosen as one of Santa Fe College’s Women of Distinction in 2012. Letters from the people who nominated her are full of praises:  “the true example of a leader in education,” “places a high value on students, the college, and service to others,” “a guiding light in local and rural communities,” “a positive role model…her greatest strengths are her perspective and humility,” “a gracious change agent whose purpose is to enhance service,” “Bennye IS Santa Fe College.”

Santa Fe College President Jackson Sasser added his voice to Alligood’s praises. “Bennye Alligood is true Santa Fe blue,” he said. “Bennye’s voice was the first that I heard on the phone 12 years ago that made me know I wanted to look seriously at Santa Fe. She has played a major role in many of the new services that have been added for students, employees and our communities. It’s a pleasure to acknowledge her transformative work and to thank her for a professional life well lived.”

After retirement, Alligood plans to spend time with family, travel with her husband and—true to character—ponder how to continue to serve the community. She was pensive as she considered what message she had for future employees of Santa Fe College, remembering how many people she had hired who said they planned to stay only two or three years.

“You may think you won’t stay here, but I can give you names of any number of people who will change your mind,” Alligood said. “You will love it, you will be proud of it and you will want to be here. Santa Fe will always be looking forward, striving to be the best for students and employees. It’s a beautiful institution without and within—beautiful aesthetics, beautiful landscapes, beautiful people.”