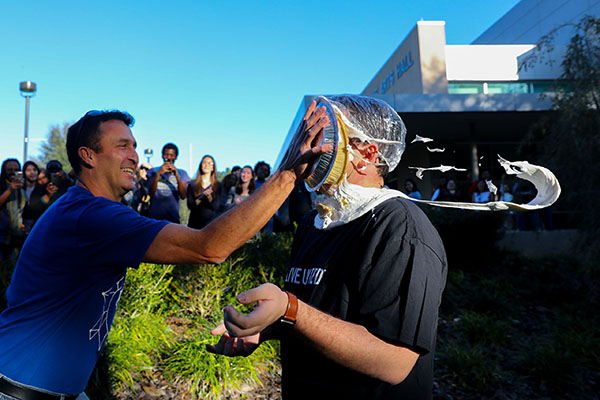 November 20, 2017 – A late surge in fundraising by Santa Fe College staff members sealed the fate for the students in Penny Wars 2017.

On the line was a pie in the face of either Vice President of Student Affairs, Dr. Naima Brown, if the students won the war; or Student Body President Cale McCall if the staff came out on top.

Penny Wars, a fundraiser for the United Way of North Central Florida, raised a grand total of $559.42.

The winning team was determined by a points system. Coin money added to a team’s score while paper money would deduct points. A penny earns a team one point, while a dollar bill takes 100 points from their overall score.

The students held a lead during much of the weeks-long fundraising war, but a strong and strategic effort from staff gave them the victory.

Congratulations to everyone who helped make Penny Wars 2017 a success.