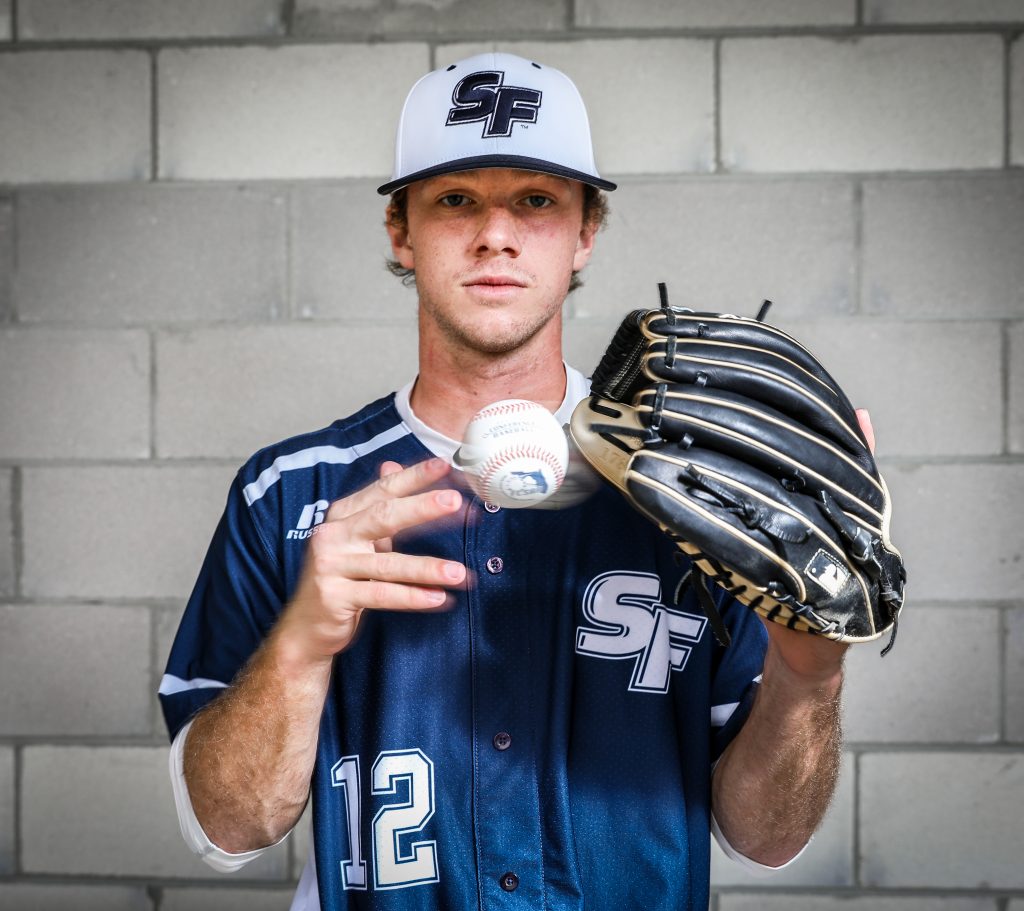 January 31, 2018 – The Santa Fe Saints fought back from a 7-1 deficit on Tuesday afternoon against a talented Tallahassee CC team, winning in the bottom of the ninth on a walk off, two out home run by Kyler Marquis to remain undefeated early in the season.

“This was a great comeback win but we didn’t really play all that well,” said SF Coach Johnny Wiggs.  “We gave them five unearned runs, made four errors, and made three big base running mistakes.  But the thing you like to see is that we kept battling.  We gave ourselves a lot of chances late in the game.”

Things were looking bleak just over midway through the game when TCC plated two runs in the fifth and three more in the sixth to take the 7-1 lead.

SF (4-0) bounced back in the bottom of the sixth, starting with a deep solo home run from Andrew Eyster.  Three straight hits and an error by the Eagles plated the second run and a bases loaded walk to Andrew Bodrato scored another run.

In the eighth, Mikey Navarrete drove in a run with his second double of the season and Bodrato scored on a passed ball to make it a one-run game.

Two scoreless innings in relief for Colt Mink kept the score where it was heading into the bottom of the ninth, giving the Saints the chance they needed.

Haydn Cano led the inning off with a single, but a pickoff move by the TCC pitcher fooled the Saints runner who was picked off to empty the bases.  The next batter grounded out and with two outs and no one on, Jarrett Pico doubled to left center to keep the rally going and bring Kyler Marquis to the plate.

Marquis, who had never hit a home run in his career at any level, hit a 1-1 pitch way out in left field, giving the Saints their second straight home walk off win.

“I saw what [Jarrett] Pico was able to do with his double, and I just wanted to get a pitch that I could handle and keep the rally going,” said Marquis.

Seven players finished with two hits each for SF and as a team, the Saints had 16, including five extra-base hits, two of them doubles by Navarrete.

Colt Mink (1-0) earned his first win of the season with his two scoreless innings.  The lefty struck out one and did not allow a base runner, facing the minimum six batters.

The Saints will be back on the road Wednesday, Jan. 31 in Tifton, GA against Abraham Baldwin Agricultural College at 3 p.m.