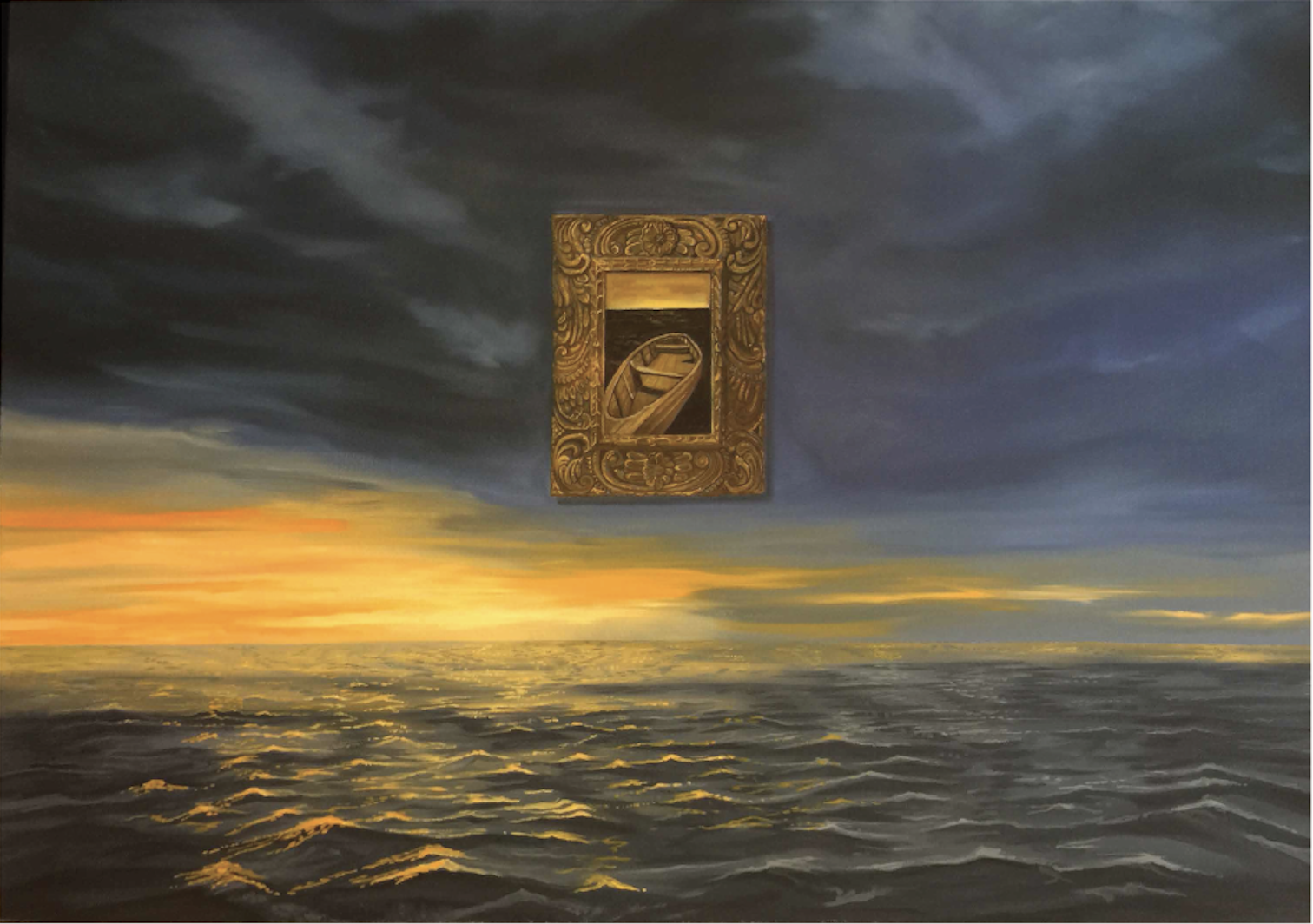 August 20, 2018 – The new 2018-19 Santa Fe College calendars will be available to SF faculty and staff immediately following fall convocation. This year’s calendar features the painting Ambos Mundos, from SF’s Coordinator for Cultural Programs, Raul Villarreal. Villarreal sat down with the Today@SF to talk about not only the painting used on the calendar, but his passion for the arts as well.

Q: What drew you to a career as an artist?

Raul: I was interested in art since I was three years old. Basically, it’s what I wanted to do with my life. I had an uncle who was an artist and he would draw for me, and my father’s twin brother, who wasn’t an artist, would also draw for me, because he was a better artist than my father was. It was in the family, so that was the first inclination I had that art would be a way of life for me.

Q: When you are creating a piece, when do you know when you’re done?

Raul: It’s really important, knowing when to stop and not overkill the work. Sometimes, I will stop working on a painting for two weeks, then when I come back to it, if I can look at it and walk away from it, I know I’m finished. But there is always that time frame when I will step away for at least one week, two weeks, look at it, and then if I’m happy, I won’t touch it. It’s very important to know when to stop.

Q: Do you work on multiple pieces at the same time, or do you complete a project before moving on to the next?

Raul: Usually about two or three paintings. Because I work with oils, it allows one piece to dry while I work on something else. This way it also keeps my mind fresh when I go back to look at the one piece. I feel like it’s almost like writing a book where you have different characters and that way, when you go back, you look at it with a fresh eye.

Q: Your painting Ambos Mundos is featured on this year’s calendar. What was the inspiration behind it, why did you create it, what’s the meaning behind it.

Raul: The title itself has to do with Ernest Hemmingway. That’s the name of his favorite hotel in Old Havana. It’s where he started to write “For Whom the Bell Tolls”. Ambos Mundos means “both worlds” and that has a lot of meaning for me. As an immigrant coming to the United States, living in both worlds, the Cuban-American world and the American world and having to assimilate being bilingual. Also, being biracial having Afro-Cuban roots and Spanish roots. It also has to do with the fact that I also write, so I’m dancing in two worlds, the world of literature, and the world of visual arts. It’s kind of that dual existence in so many different ways.

Q: When it comes to your art, what gives you the most joy – the creation itself, or the appreciation other people have for your work?

Raul: You know what you’re trying to say, because the work is based on your experience, but to have someone else walk away, and take from your work something they can relate to – that is really meaningful.

Q: Talk about where your art has taken you, and where you hope it will take you.

Raul: I’m been really lucky because I’ve been able to travel to so many interesting and beautiful places in the world. I was able to go to China for two weeks in 2008. I have exhibited in France, Italy, Spain, Costa Rica, Canada, Cuba, all around the United States. For me, I love to travel and have new experiences, and art has allowed me to do that. I have friends in Tokyo, Switzerland,  Algeria, and art is what does that – it bridges. And hopefully, that communication can link two worlds – Ambos Mundos.

Any SF employee who wants a calendar, but was unable to get one at convocation can pick them up outside the Communications & Creative Services office in Building P, Room 238.