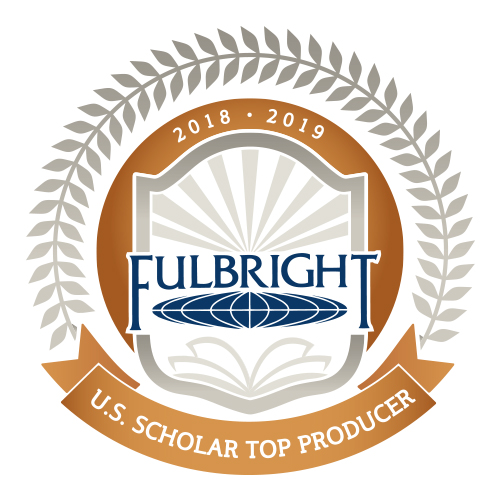 February 15, 2019 — Santa Fe College is proud to be included on the list of U.S. colleges and universities that produced the most 2018-2019 Fulbright U.S. Scholars. Each year the U.S. Department of State’s Bureau of Educational and Cultural Affairs announces the top producing institutions for the Fulbright Program, the U.S. government’s flagship international educational exchange program. The Chronicle of Higher Education publishes the lists annually.

Only 26 out of the over 1100 associate/baccalaureate institutions in the United States produced a Fulbright Scholar during the 2018-2019 academic year.  Santa Fe College is proud to be part of this distinct group.

“We thank the colleges and universities across the United States that we are recognizing as Fulbright top producing institutions for their role in increasing mutual understanding between the people of the United States and the people of other countries,” said Marie Royce, Assistant Secretary of State for Educational and Cultural Affairs. “We are proud of all the Fulbright students and scholars from these institutions who represent America abroad, increasing and sharing their skills and knowledge on a global stage.”

“When I came to Santa Fe College seventeen years ago, one of my goals was to internationalize the college,” SF President Dr. Jackson Sasser said. “For any college or university, the Fulbright recognition is the zenith to the commitment to both internationalization and academic excellence. I want to thank all of the faculty and staff who worked so diligently to help us reach this major milestone.”

The Fulbright Scholar Program is supported at SF through the International Education Office which is supervised by Dr. Vilma Elisa Fuentes, Assistant Vice President for Academic Affairs.  Additional information about SF’s international programs and grants may be found at sfcollege.edu/international.

Since its inception in 1946, the Fulbright Program has provided more than 390,000 participants—chosen for their academic merit and leadership potential — with the opportunity to exchange ideas and contribute to finding solutions to shared international concerns. Over 800 U.S. college and university faculty and administrators, professionals, artists, journalists, scientists, lawyers, and independent scholars are awarded Fulbright grants to teach and/or conduct research annually. The Fulbright U.S. Scholar Program operates in over 125 countries throughout the world.

The Fulbright U.S. Scholar Program is a program of the U.S. Department of State, funded by an annual appropriation from the U.S. Congress to the Bureau of Educational and Cultural Affairs, and supported in its implementation by the Institute of International Education.

For more information about the Fulbright Program, visit eca.state.gov/fulbright.