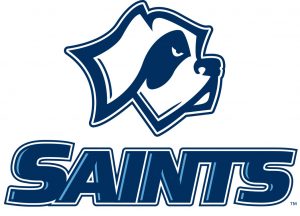 April 8, 2019 – The Santa Fe Saints baseball team took advantage of early wildness by the Blue Wave pitchers, scoring eight runs in the top of the first inning with just three singles on their way to a 13-2 win in the rainout makeup game played in Jacksonville Sunday.

“We did a good taking advantage of some walks and hit batters,” said SF head coach Johnny Wiggs. “The first inning really got us off to a good start.”

Staked with an 8-0 lead Anthony Arguelles (4-0) scattered nine hits over 5.2 innings, striking out five with no walks to earn the win.

The Saints are presently in third place in the conference with a 9-7 record, three games behind The College of Central Florida and two games behind Seminole State College with eight games to play.

SF travels to Leesburg to take on Lake-Sumter State College at 3 p.m. Monday before returning home to host LSSC at 3 p.m. Wednesday.

Meanwhile, the Saints softball team rallied for five runs in the bottom of the seventh to pick up a 5-4 win over Lake Sumter State College Sunday afternoon in Gainesville. The Lake Hawks took the nightcap 7-2.

“The fact we were able to string together that many hits was amazing,” said Fico. “It would have been easier on my nerves if they had done it a little earlier, but it made for an exciting finish.”

The Saints (22-24, 10-10 MFC) are battling Florida State College/Jacksonville for third place in the conference with four games remaining in the season.