Spring Convocation Marks the End of an Era 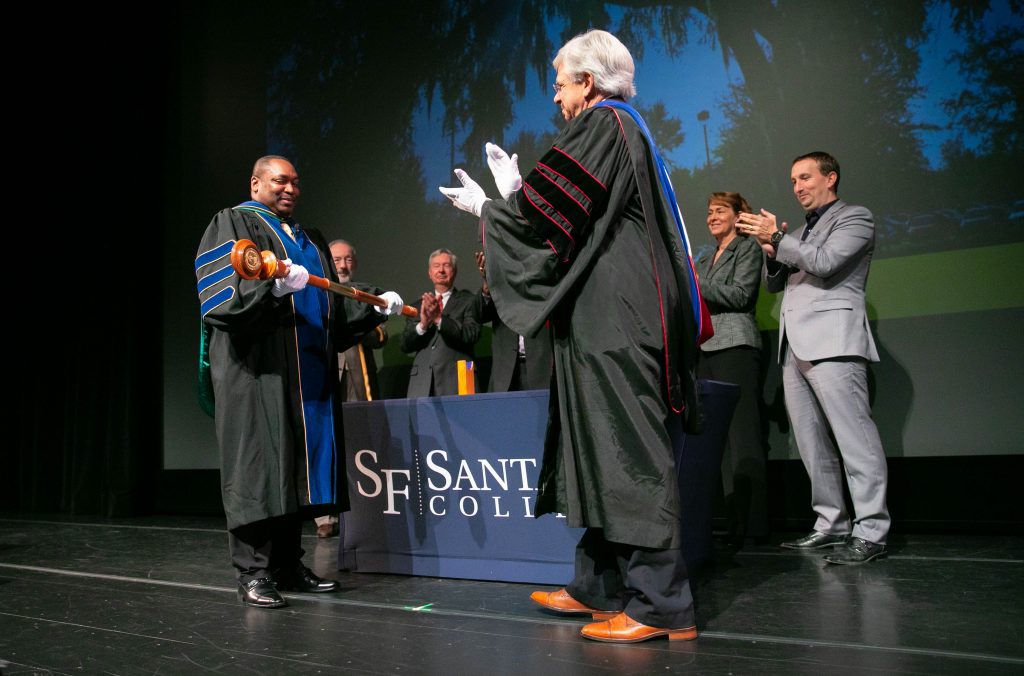 January 3, 2020 – Santa Fe College held spring convocation Friday morning. In addition to the official start of the spring term, this year’s event offered surprises for those in attendance – most notably the arrival of Dr. Paul Broadie II, who will become the college’s fifth president in February.

Current president, Dr. Jackson Sasser opened by honoring the many employees at SF who have helped produce the convocations during his presidency. After welcoming current and former Board of Trustees and SF Foundation board members, Dr. Sasser announced that the college’s Opening Doors campaign exceeded its $10 million goal. Funds raised will go toward scholarships for economically challenged and non-traditional students, helping to close equity gaps in the college’s service district.

As has been tradition, Dr. Sasser acknowledged both employees who will be retiring before fall convocation and new employees who have become part of the SF family since the fall of 2019. The most notable of those new hires is Dr. Broadie, who was selected to be the new president by the Board of Trustees in October and will take office February 1, 2020.

Dr. Broadie briefly addressed the faculty and staff, saying that he applauded the work being done on a daily basis at the college and the profound impact that it has had. “We, together, will dream big,” Broadie said, adding that the college will “shatter equity gaps” and “ensure that this is an institution of innovation.” In addition to building on the successes of Dr. Sasser, Dr. Broadie said he would spend his first hundred days listening, learning and leading.

As convocation continued, Dr. Sasser listed some of the many notable accomplishments of the college and how SF continues to live up to its mission. Discussing how SF provides opportunities to all students, from the Displaced Homemakers program and the Spectrum of Success, to students in Leadership programs and the SF Honors program, Dr. Sasser said the goal is to always strive for excellence.

Convocation wrapped up with Dr. Sasser taking about the college mace, which was hewn from a beam from the Bradford County courthouse, now SF’s Andrews Center. Dr. Sasser, with Board of Trustees gathered around the stage, then presented the mace to Dr. Broadie stating that it “represents our integrity, our commitment to service, our accountability and commitment to excellence.”

Dr. Broadie will speak to the college community again when he gives his inaugural address Tuesday, Feb. 4, 2020, at 2 p.m. in the Fine Arts Hall.