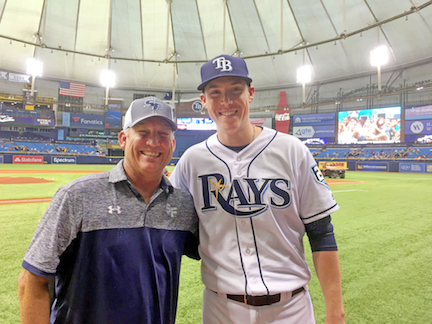 Ryan Yarbrough, first Saint to play in the World Series

Former Santa Fe Saints left-handed pitcher Ryan Yarbrough is playing in the Fall Classic this week with the Tampa Bay Rays. Ryan played baseball for the Saints in the spring of 2011 and 2012, winning the Mid-Florida Conference both years.

“It’s real exciting to watch Ryan live his dream of playing in the major leagues and now the ultimate, playing in the World Series,” said SF Head Coach Johnny Wiggs. “The whole Santa Fe College baseball program is proud of Ryan and we are living vicariously through him.”

Ryan has been in the Major Leagues for 3 years with the Rays and has put together good numbers with a record of 28-16 and an ERA of 3.97. This postseason, Yarbrough has appeared in four games, pitching 14 innings with an ERA of 3.86. He made a relief appearance in Game 1 of the World Series and started Game 4.

When Ryan signed with the Santa Fe Saints his dad told coach Wiggs that his son would play in the Major Leagues. He’s done that and now has a chance to be a World Series Champion. Go get ‘em Ryan! Your SF family is cheering for you.