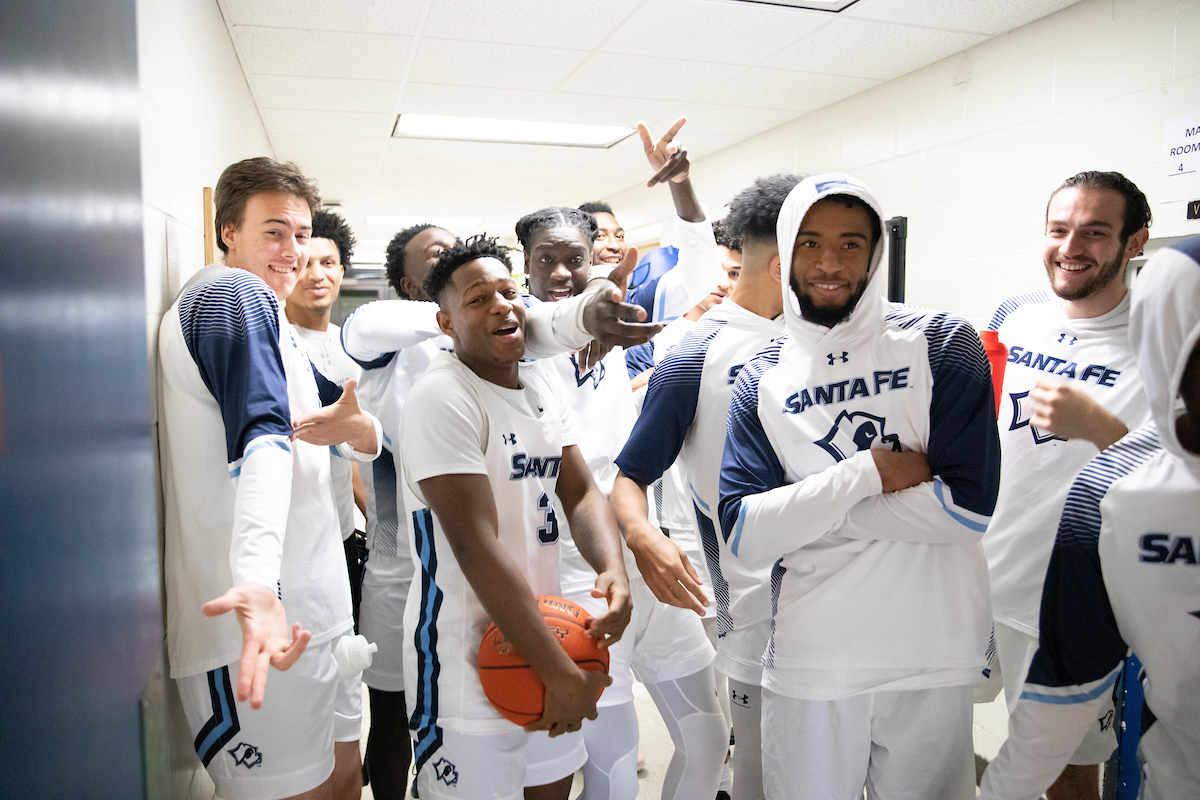 The Saints were in control the vast majority of the game and led the whole way, punching their ticket to the FCSAA/NJCAA Region 8 State Tournament as the top team in the Central Conference.

The Saints took a commanding 9-2 lead out of the gate, with Brandon Farmer pouring in a quick eight points, which included two connections from beyond the arc.

The Eagles netted the game’s next six points but could never stake claim to a lead in front of their home crowd, as the Saints had answers to the challenges the Eagles presented.

With SF leading 19-17 nearing the midway point of the opening half, the Saints put together an 11-4 run to take a 30-21 lead, paced by six points from Hasan Abdul-Hakim.

The Eagles tried to make a push to make it a single possession game in the waning moments of the half, but Nikolaos Noumeros was able to bank in a deep three-point try in the final second to make it a 37-30 game.

Farmer continued to prove to be “Big Shot Brandon” in the opening half and made the most of his opportunities spacing the floor to total 16 first half points with four triples.

The Saints went on a 10-0 run during that stretch of play, with four different players finding the bottom of the net.

The Eagles started to make their final push, however, and began to make things a bit worrisome for the Saints.

12 unanswered points from the hosts brought Polk State to within a single possession, 66-63, with just 1:12 left to play.

On the SF ensuing possession, Abdul-Hakim was able to navigate his way to the free-throw line and make both.

The Eagles trimmed the gap to just three points once again down the strech, and miraculously had a good look to tie in the final seconds, but Nasir Mann climbed the ladder to control the defensive rebound before tacking on the final point of the game on a free-throw to put it out of reach.

The Central Conference title was the team’s first since 2012. Coach Mowry has now won five at the helm of the program.

Farmer, Douglas, and Abdul-Hakim were workhorses and never came out of the ballgame.

Farmer chose a good day for a new career-high, putting up a game-high 25 points on 10-of-23 shooting with five triples. He tied for the team-high with eight rebounds.

“I am really happy for our players! We have really played hard all year and throughout our conference schedule. To win on the road at Eastern Florida and Polk the last two road games makes it a well-deserved title! Everyone has contributed big time, whether in games or practice. Our guys bounced back quickly when games didn’t go our way, which is a true sign of a champion! They will remember this experience for a long time. They are not satisfied, and we are all looking forward to competing in the Region 8 Tournament next week!”

The receiving votes Saints (24-5, 12-3 Central) await their seeding and matchup for the FCSAA/NJCAA Region 8 State Tournament, which will run from Mar. 2 – Mar. 5 at Northwest Florida State College’s Raider Arena in Niceville, Fla.