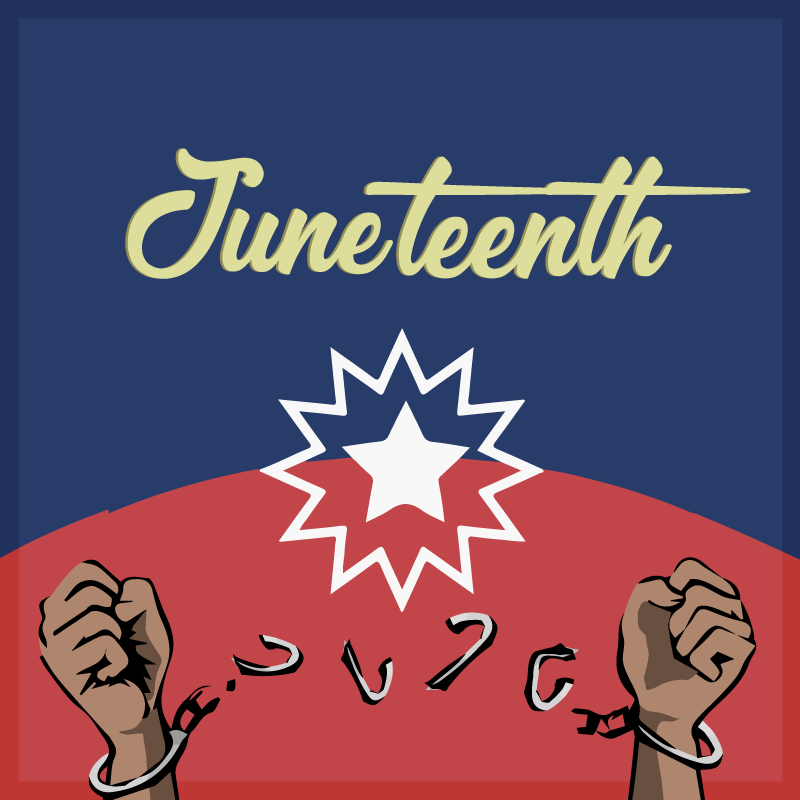 Santa Fe College will be closed on Friday, June 17 in observance of Juneteenth the following Sunday. Student Life will host a Juneteenth Celebration and Film Screening on Wednesday, June 15 from 1-3 p.m. in the S-Breezeway. Join us at 2 p.m. in S-29 for a screening of High on the Hog: How African American Cuisine Transformed America, hosted by Stephen Satterfield. We will screen Episode Four: Freedom, which highlights Juneteenth traditions. Refreshments will be provided.

Juneteenth commemorates June 19, 1865 when enslaved people in Galveston, Texas heard the Emancipation Proclamation read aloud for the first time, despite being issued in Washington, D.C. two and a half years earlier. The holiday recognizes the moment when the last – rather than the first – enslaved people in the country were informed of their freedom. This day is celebrated in Black communities across the United States through regional events and traditions.

On June 17, 2021, Juneteenth became a recognized federal holiday when the President signed the Juneteenth National Independence Day Act into law. About 80 members of Congress, community leaders, local officials and activists, including 93-year-old Opal Lee, who is known as the “grandmother of Juneteenth,” attended the White House signing ceremony. Juneteenth is the first federal holiday to be added since MLK Day was established in 1983.

Juneteenth Jeopardy with the Association of Black Faculty and Staff
Thursday, June 16, at 3 p.m.
This will be held on Zoom – register to attend through this link – sfcollege.zoom.us/meeting/register/tJElceuoqjkoE9Jqz73DGgpC_wAMj_gCGb21

Here are some more ideas for how you can observe Juneteenth:

Lift Every Voice and Sing

Lift Every Voice and Sing is known as the Black National Anthem and was composed as a poem by James Weldon Johnson in Jacksonville, Florida in 1900. The song is sung during important events such as Juneteenth, Black History Month celebrations, HBCU commencements, religious services, and civil rights protests. John Legend sang this version of the song for the Morehouse School of Medicine 2020 Commencement Ceremony:

The Emancipation Proclamation signed by Lincoln in 1863 says:

I do order and declare that all persons held as slaves within said designated States, and parts of States, are, and henceforward shall be free; and that the Executive government of the United States, including the military and naval authorities thereof, will recognize and maintain the freedom of said persons.

The Proclamation only applied to states that had seceded from the Union and it could not be enforced everywhere until the Civil War ended. Slavery wasn’t abolished until the 13th Amendment was ratified on December 6, 1865. For more historical context, watch this video about the legacy of the Emancipation Proclamation created by the Smithsonian’s National Museum of African American History and Culture:

Below are some highlights from the L.W. Tyree Library and Learning Commons collections that focus on Juneteenth and the Black struggle for freedom in the United States. The following books are available for SF students to check out at the Library:

Juneteenth: A Novel, Ralph Ellison
The story of a Black man who passes for white and becomes a race-baiting U.S. senator. When he is shot on the Senate floor, the first visitor in hospital is a Black musician-turned-preacher who raised him. As the two men talk, their respective stories come out.

On Juneteenth, Annette Gordon-Reed
The essential, sweeping story of Juneteenth’s integral importance to American history, as told by a Pulitzer Prize-winning historian and Texas native.

Emancipation Betrayed: The Hidden History of Black Organizing and White Violence in Florida from Reconstruction to the Bloody Election of 1920, Paul Ortiz

In this examination of African American politics and culture, Paul Ortiz throws a light on the struggle of Black Floridians to create the first statewide civil rights movement against Jim Crow.

Juneteenth for Mazie, Floyd Cooper
Little Mazie wants the freedom to stay up late, but her father explains what freedom really means in the story of Juneteenth, and how her ancestors celebrated their true freedom.