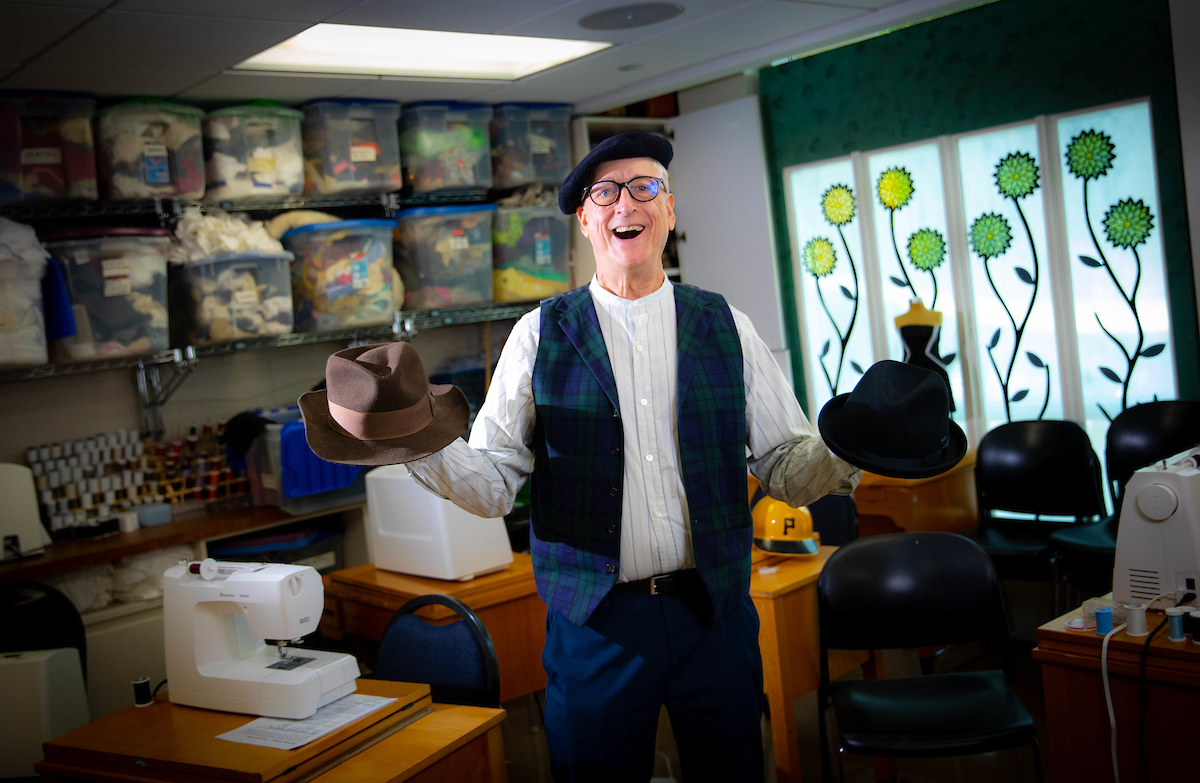 Terry Klenk: Driven by the Element of Discovery

I think it is the nature of theater. I’ve been doing this since I was 14 years old. I started at a community college, summer theater production of Charlie Brown. And I literally have been on that same road ever since.

I was fortunate enough to, to start to study at the Cleveland Institute of music when I was in high school and branched out from what I didn’t see as a great opportunity in classical voice to doing theater, doing musicals. And so that’s, that’s really what motivates me. I think the strongest is that element of discovery that element of creation in all things.

How did you end up in Florida teaching at SF?

I went to Miami of Ohio for undergraduate then I went to Kent State for a Master’s degree. Long story short. I  just got to test the waters of graduate school and they wound up giving me an assistantship, I knew very quickly that I really didn’t think I had the interest in the theoretical side of theater or a PhD. So, once I did this MA, in directing I went back and threw my hat into the performance ring, and lo and behold, after I had done a couple of shows at Kent State, I got all these offers for performance, one of those was at the FCTC at the University of Florida.

After graduating from Florida I did a yearlong tour with the Hippodrome Theatre. They used to do these school tour shows, but we also played all kinds of other theatres, the Gusman theater, the Florida theater, the big theaters in Florida. This was in the early 90s and another time of recession, not a good time to be in the performing arts. This is when I started thinking, “I really don’t want to be a performer. I really need to be looking for teaching jobs and such.”

So, I came out here and I interviewed with Leslie Lambert, who says, “Yes, I’m sure we can find something for you.”

Looking back over the past three decades is there anything about this place that is unique, perhaps something that has remained essentially the same?

In holding the Florida Theatre conference here for a dozen years we used to meet theater divisions from different schools. And I’d hear all these problems that other people had with their administrations. And the predominate feeling at SF was, well, we don’t always get what we want, exactly the way we want it, but they really are committed to helping students and retaining students and really achieving that level of commitment. I think that is, that is the biggest part of what I think the Santa Fe way that has not changed is that student centric focus.

What are your proudest accomplishments?

Certainly, seeing the development of the theatre program and pushing for the Fine Arts Hall. In addition, hosting the Florida Theatre conference at SF for over a decade. I’m really proud that the institution said this 3000 person festival could come to SF.  It was a great introduction to the city, for people across the state to come and see and utilize our facility, but also to advertise the college. During that time and tenure, we were the number one state college in the country.

Something else that I’m very proud of, is being chosen to speak to the Aspen conference. Now that might be because Ed Bonahue (former SF Provost) was my colleague, we were hired on the same search as he would say. In part it may also be that when they were looking for somebody to talk about retention and what we do well here at Santa Fe, they chose an actor to do it. And that the Aspen Institute recognizes that the arts play a major role in any kind of educational institution, I was kind of able to drive that home.

I imagine as you have been planning for retirement, you probably didn’t expect that your last couple years would coincide with a global pandemic. What have been some of the toughest challenges and what have been the bright spots in the last two years?

Absolutely. Technology, technology has been the biggest challenge and the bright spots, bright spots have been the students. Those students who held on with me through Zoom classes, at times maybe there’s only three or four of them, but we were there together, we were the window to the world. At that point, performing to that screen, you’re trying to see how they’re doing, are they holding on? It’s just even kind of an unimaginable thing. Boy, that was a challenging time. If anything has worn me down, it has been in the last five years, because we’ve had to redesign, we redesigned all our classes for this online format, but there are some things that cannot be done for theatre online. It becomes something else, you know, television, whatever you want to call this streaming, whatever it is, it’s another medium. So that is hard and it has not recovered and it won’t recover, for a long time.

What do you hope to accomplish in your first five years after retirement?
Oh, my goodness. Well, the first thing on the agenda is get my dog a regular schedule. I just got a puppy a year ago. It’s a regular schedule. He can have his daddy going home and going back and forth, back and forth, back and forth.
You know, I have made no plans about quote, retirement because I have already made it known that I would like to come back and be a full time adjunct, again, at least in the costume area. The famous director, George Abbott, directed well into his 90s, so there really is no sense of retirement with theater. You just keep phasing into the next phase of whatever the theater brings. So that’s kind of focused and centered my life.
That’s who I am and that’s where I’ll be, even if it is from just across the parking lot.

After a career that has spanned more than 30 years Terry Klenk, Professor of Theatre and Humanities at SF, bids farewell with the production of Audience by Michael Frayn, with the first showing tomorrow evening and running through Saturday.

Tickets are available from the Fine Arts Hall box office at 352-395-4181 or online from Showpass.