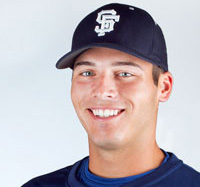 Gainesville, FL – Santa Fe pitcher Brad Markey had one of the best statistical season in Santa Fe history in 2012 and on Wednesday was rewarded when he was selected on the final day of the Major League Baseball First Year Players Draft in the 35th round by the New York Mets. He will now have to choose whether or not to finish his collegiate career at Virginia Tech, where he signed a scholarship, or play professionally.

Carlos Garmendia, a 2012-13 SF signee out of Miami, FL, was drafted by Milwaukee Brewers in the 19th round. He will now have a similar decision as Markey, to play professionally, or attend college.

Three former Saints were also drafted. Ryan Mathews, a member of the 2009 Santa Fe State Championship team and current senior at North Carolina State was taken in the 27th round by the Oakland Athletics. Mathews and the Wolfpack are still competing this season and make a trip to Gainesville Saturday to take on the Florida Gators in the NCAA Super Regional. He currently leads NC State with 17 homeruns and 62 RBI while hitting .336.

Zach Taylor, who currently plays for Armstrong Atlantic and competed for SF in 2011, was selected in the 12th round by the Philadelphia Phillies. Ben O’Shea, a member of the 2011 Saints and pitcher for the University of Tampa, was taken in the 35th round by the St. Louis Cardinals.