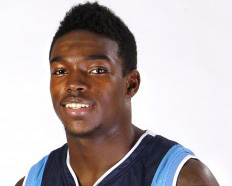 Gainesville, FL – Bobby Hunter lived up to the hype on Wednesday evening, scoring 34 points to lead the Santa Fe Saints (12-10, 1-1 MFC) past Florida State College-Jacksonville 85-61.  It was the second straight 30 point performance for Hunter and ninth straight 20 plus point game.  He currently leads the NJCAA in scoring with 25.2 points per game.

“Bobby had another solid performance tonight,” said SF Coach Chris Mowry.  “He didn’t have his best night shooting the ball but did a nice job attacking the hoop and made his free throws.”

The game was tight through the first ten minutes but a strong effort by the Saints over the final ten gave them a 44-29 half time lead.  Deonte Moore paced the late surge with four three point baskets.

“Deonte gave us a great spark off the bench tonight,” said Mowry.  “He found his shooting stroke early and made some big baskets for us.”

FSC-J hung around to start the second period, cutting the SF advantage to 49-41 with 14:08 left in the game.  That was as close as the Blue Wave would get as the Saints flipped a switch and outscored FSC-J 29-4 over the next nine minutes to take their largest lead of the game 78-45.  SF put it on cruise control the final five minutes and coasted to a 85-61 win.

The Saints travel to Daytona on Saturday, January 26 for a game against the Falcons at 4:00 PM.