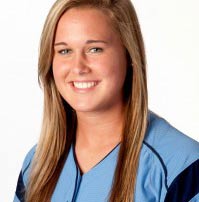 Gainesville, FL – The FCSAA #8 Santa Fe Saints (3-1) opened up the 2013 season on Saturday at the JUCO Kickoff Classic and came away with three wins in four games against competition from the states of Florida and Tennessee.

“Overall, we had a total team effort today, both at the plate and on defense,” said SF Coach Chris Ahern.  “We are extremely pleased at the results of the first day.”

The first game of the day saw SF battle FCSAA #7 Gulf Coast State College.  The game went to extra innings where the Saints pulled out a 7-6 victory.

Game two was another high powered offensive affair against Chattanooga State College (TN).  The Saints had a commanding early lead but gave up five in the fifth before clamping down to earn the 9-7 win, moving them to 2-0 on the day.

Northwest Florida State College was the only team of the day to get the best of Santa Fe as the Raiders edged SF 3-1.  Karla Claudio was the hard luck loser after giving up only three hits and one earned run.  The two other NWF runs came via Santa Fe errors.

The Saints ended the day on a high note defeating Pasco-Hernando CC 10-2 in five innings due to the mercy rule.

Ashley Chapman picked up two wins in the circle and Amber Maxey had the other victory.

The 3-1 Saints play their home opening double header on Saturday, February 2 against the defending FCSAA champions State College of Florida at 1:00 and 3:00 PM.