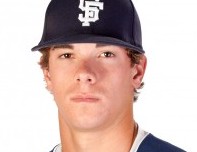 Gainesville, FL – Santa Fe second baseman Jared Shouppe had a career day on Wednesday afternoon against the #1 ranked team in the state, going 4-for-5 with two triples, a double, a single and four RBI.  The rest of the offense wasn’t bad either.  The FCSAA #5 Saints (4-0) combined for 19 hits and had seven players with multiple RBI.

All of this occurred in only six and a half innings as the game was called after the top of the seventh due to darkness.  FCSAA #1 Polk State College managed nine runs on seven hits and two errors.

The big blows came in the second when the Saints scored seven runs on eight hits and in the fifth when SF put up 10 runs on four hits and multiple walks and hit batters.  The 10 run inning was the second in as many games for SF.

The Saints travel to Avon Park on Saturday, February 2 for a double header against South Florida State College at 12:00 noon.