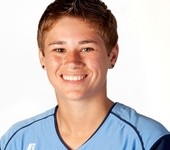 Gainesville, FL – The Santa Fe Saints held on in the first game of a double header against Seminole State College, winning 2-1 for their 30th win of the season.  Sid Masso and Rachel Brown came up with the RBI hits and Karla Claudio (15-6) allowed just one seventh inning run to pick up the win.

Masso finished the first game 2-for-4 and Brown was 1-for-3.

The Saints (31-14, 16-4 MFC) decided one close game was enough and exploded in game two, piling up 16 runs in a five inning mercy rule victory.  Seminole scored both of their runs in the first inning on Santa Fe errors and it was all SF the rest of the way, led by a 10 run third inning to put the game out of reach.

Karla Claudio and Megan McDonald paced the offense with each hitting a homerun.  The homer was Claudio’s 10th of the season and McDonald’s seventh.

Amber Maxey (9-1) pitched all five innings of game two, winning her ninth game of the year.

With the two wins, Santa Fe has clinched a spot in the FCSAA State Tournament in Pensacola, FL May 3-5.

The Saints continue Mid-Florida Conference play on Tuesday, April 16 in Ocala against the College of Central Florida at 2:30 PM.