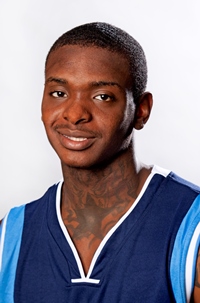 Gainesville, FL – The Santa Fe Saints trailed by six with just minutes to go in their Mid-Florida Conference tournament game against Florida State College-Jacksonville, but rallied to defeat the Blue Wave, holding them scoreless over the final 3:50 to pick up the win.  The Saints will now face off against the College of Central Florida on Tuesday, February 25 at 7:30 PM with the winner moving on to the FCSAA State Tournament.

“FSC-J did a nice job tonight and we were not very good to say the least, on defense,” said SF Coach Chris Mowry.  “We’d better be a lot better tomorrow if we want to beat the Patriots.”

Santa Fe took an early 10-8 lead but quickly fell behind by as many as eight before fighting back to make it a 38-34 FSC-J lead at the half.

In the second half FSC-J answered every Santa Fe rally with a run of their own and held a 68-62 lead with 3:50 remaining after an Osborn Blount floater.

Jordan Banks cut the margin to four with a layup and just seconds later Jon Hood took an outlet pass off a Reggie Hart steal all the way to the rack to make it a 68-66 game.

FSC-J missed a wide open three on the ensuing possession and Jordan Banks slammed home a missed layup at the other end to tie the ball game at 68-68.

Needing another defensive stop the Saints stepped up again, forcing an off-balance three from Blount to give SF the ball back with 50 seconds left.

Hart took the ball at the top of the key and drove all the way to the basket, adjusting in mid-air to finish the layup and give Santa Fe the 70-68 lead.

Morris Marshall had a chance to put the game away at the free throw line with 10 seconds left but missed the front end of the one and one, keeping the game alive for FSC-J.

On their final possession, the Saints played it smart and fouled with 1.8 seconds, committing just their fifth team foul.  Lenny Ruffin took the inbound pass and launched a 30 footer that hit the front of the rim and secured the win for SF.

“Really proud of our guys for finding a way to win that basketball game,” Mowry commented after the game.  “We did a much better job in the second half taking care of the ball and some guys stepped up when we needed them to.

SF had 10 turnovers in a sloppy first half, but committed just one in the second half.

The Saints once again dominated the boards, outrebounding the Blue Wave 42-33, including 14-6 on the offensive end.

The Saints will travel to Ocala tomorrow to take on CF at 7:30 PM with a State Tournament berth on the line.  Fans can watch live at www.ihigh.com/collegeofcentralfla