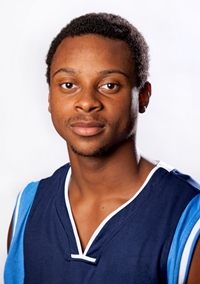 Saints Season Ends at the Hands of Central Florida, 69-65

Gainesville, FL – The Santa Fe Saints had the ball with the score tied against the College of Central Florida in the finals of the MFC Tournament and a chance to take the last shot, but an errant pass sailed over Morris Marshall’s head and CF corralled it and scored the go ahead and eventual winning basket, ending the Saints season in heartbreaking fashion.

Morris Marshall was unstoppable for Santa Fe (22-9), and nearly single handedly propelled the Saints to the post season.  He scored a career high 33 points on 11-of-19 shooting, 23 coming in the first half.

“Morris was phenomenal for us tonight,” Coach Chris Mowry said after the game.  “The rest of the guys battled hard but just struggled a little bit to score.”

Santa Fe trailed by as many as 12 in the first period, but fought back behind the three point sharp shooting of Marshall to close it to 41-39 at the half.

Jon Hood opened the second half with a three pointer to give SF their first lead of the game.  The contest was back and forth until a late run by CF put the Patriots up by six with just over two minutes left.

Santa Fe continued to plug away and a put back dunk by Andre Horne tied the game up at 65-65 with under a minute to play.

The Saints stole the ball on the ensuing possession and had the ball with the shot clock off and an inbounds pass underneath their own basket.  The play was drawn up to pass the ball to Marshall in the back court and have him take the last shot, but it got away from the inbounder and Raheem Suarez for CF stole the ball away and went coast to coast, making the bucket and drawing the foul.  He missed the free throw, giving the Saints new life.

SF worked the ball around and found Salim Gloyd for an open look.  The ball looked good out of his hand, but rattled around the rim and popped out.  Rodell Wigginton gathered the rebound and was fouled.  He hit both free throws to ice the game and help CF move on to their ninth straight State Tournament appearance.

Central Florida dominated the glass, outrebounding the Saints 51-32 and 20-8 on the offensive end.

Santa Fe ends their season, but Coach Mowry says the team has nothing to be ashamed of after accumulating 22 wins against stiff competition.

“The guys played hard tonight, that’s all I can ask of them,” said Mowry.  “Things didn’t go our way in the end.  Hopefully this is a game they all remember for a long time.  It was a great atmosphere, just not the result we wanted. Our freshman really grew up and improved as the year went on and our sophomores were all big contributors as well.  They should all hold their heads up high.  We beat six of the eight teams that will be in the state tournament and played a very difficult schedule.  These guys had a great season, it just didn’t end the way we wanted.”