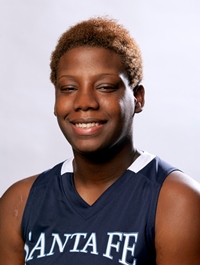 Gainesville, FL – The Santa Fe Saints used defense and timely scoring to squeak out a 56-53 victory over rivals College of Central Florida Tuesday afternoon, securing a spot in the FCSAA State Tournament March 6-8 in Ocala, FL.

Balanced scoring was the name of the game for SF , who had five players score seven or more points.  Leading the way was Brenique Garment who scored 11 points to go with eight rebounds in just 17 minutes of action.  Areana Davis had a solid game as well, finishing with eight points and 11 rebounds.

Santa Fe was aggressive in the first half, scoring a majority of their points in the paint.  They held CF to just 30% shooting and turned the ball over just once in route to a 31-24 halftime lead.

Central Florida fought back in the second half to close it to 41-39 with 9:10 remaining, but the Saints answered with a floater from Stephanie Ball and a three pointer by Desa’Rai Shaw to push the lead back to seven.

The Patriots kept it close and three point shot by Kai Jones with just over a minute left made it a 55-53 game.

Shaw made one of two free throws with eight seconds left and CF used six seconds getting the ball past half court before coach Tommy Jones called a time out.  With two seconds left Kai Jones threw it inbounds and the pass came right back to her but her attempt to tie the game missed to the left, securing the victory for SF.

“I’m proud of how hard we fought tonight,” said SF Coach Chanda Stebbins.  “Now we will head to Ocala and see what we can do.”

The Saints will matchup against St. Petersburg College on March 6 in first round action.  The two teams will tip off at 1:00 PM.  The game can be watched live on www.ihigh.com/collegeofcentralfla.  For full State Tournament info, click here: http://www.thefcsaa.com/womens-bball-state-tournament