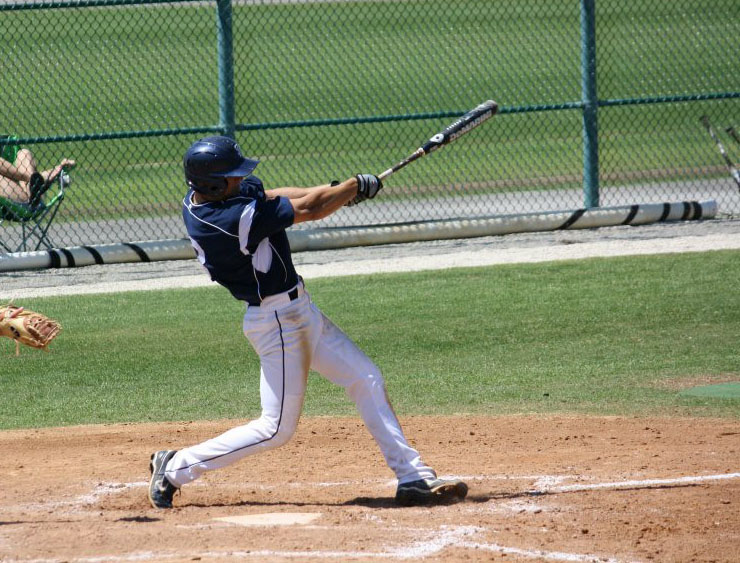 Lusignan and the Saints Rally from Five Down to Defeat Lake Sumter, 14-6

The Santa Fe Saints started off slow against Lake Sumter State College on Wednesday afternoon, but 13 unanswered runs, paced by six RBI from Colby Lusignan, led SF past the Lakehawks 14-6.

Lake Sumter (14-8, 1-4 MFC) led 6-1 after three and a half innings, with the Saints having committed three errors in the process.

Santa Fe (13-9, 3-2 MFC) started the their comeback in the bottom of the fourth with a two run Casey Scoggins single to cut the deficit to 6-3.

In the bottom of the sixth, the Saints opened things up, scoring six runs on five hits and a Lakehawk error.  Chipper Andzel knocked in the first run, plating AJ Mazzurco to make it 6-4.  The next batter, Casey Scoggins, reached on a walk and two batters later George Ragsdale drew a bases loaded walk to close the gap to 6-5.  Lusignan stepped to the plate with the bases loaded and proceeded to drill a ball to the right center field gap, clearing the bases and giving SF their first lead of the game 8-6.  Lusignan scored later in the inning on an error to make it 9-6 at the end of the sixth.

In the seventh Santa Fe added four more runs on four hits.  Scoggins knocked in the first with a RBI single and Lusignan put the game out of reach with a three run blast over the right field fence to make the score 13-6

AJ Mazzurco put an explanation point on the victory in the eighth when he smashed a deep homerun to right.

Brady Price started and was solid on the mound, allowing just four hits and two earned runs in five innings with five strikeouts.  Four of his runs surrendered came directly as a result of Santa Fe errors.

Jake Reimer (3-0) picked up the victory with three innings of relief work.  He scattered three hits and struck out two with no walks.  Walker Burgess pitched a scoreless ninth inning to close out the win.

The Saints and Lakehawks will meet for a third time in a row on Friday in Leesburg at 3 p.m.