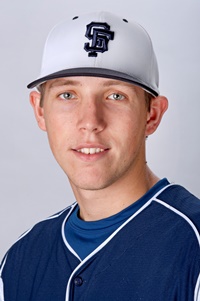 The Saints (20-11, 8-4 MFC) took an early 3-0 lead in the top of the second on a two RBI single by Casey Scoggins and a RBI ground out by Roger Gonzalez.  The Blue Wave got one run back in the bottom of the second but SF rallied for two more runs in the third on back to back bases loaded walks.

SF added insurance runs in the sixth and seventh on an RBI double from Ragsdale and a RBI single by Brady Roberson.  That was all the run support Reimer would need as he shut down FSC-J the rest of the way.

The Saints will open a big series against St. John’s River State College on Wednesday in Gainesville at 3:00 PM.  Santa Fe is currently tied for first in the Mid-Florida Conference with SJRSC and College of Central Florida.