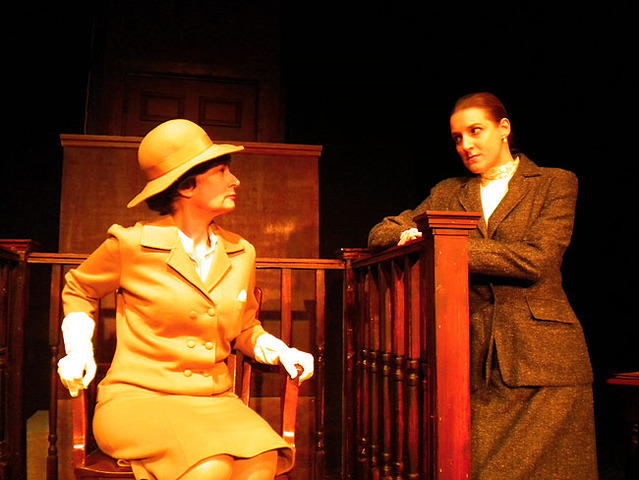 Daytime television star Judith Chapman—who visited Santa Fe College in 2013 to teach and star in “Vivien”—returns to Gainesville in 2015 as part of the Santa Fe College Master Artist Series to direct “Invasion of Privacy,” an award-winning play by Larry Parr that dramatizes the famous Zelma Cason-Marjorie Kinnan Rawlings lawsuit and trial that took place in Alachua County. The play will run Thursday-Saturday, June 18-20, 2015, in the Fine Arts Hall at the Northwest Campus, 3000 NW 83 Street, Gainesville.

Tickets for the performance are $15 for adult orchestra and mezzanine seats; $12 for adult balcony seats; $9 for seniors, children, and University of Florida students and faculty; and $9 for faculty, staff and students of Santa Fe College. For ticket information, call the Box Office at 352-395-4181. Tickets may be purchased on line at http://www.sfcollege.edu/finearts/. After winning a Pulitzer Prize for “The Yearling,” the Cross Creek writer Marjorie Kinnan Rawlings was at the height of her career when she was sued in 1946 by her friend, Zelma Cason, in the first right of privacy case brought against an author. Cason’s lawsuit pitted a citizen’s right of privacy against an author’s constitutional guarantee of free speech. The fascinating cast of characters in “Invasion of Privacy” includes Rawlings, a noted author given to drinking and “black spells”; Kate Walton, the first female attorney in Florida who represented Cason; and Sigsbee Scruggs, the cagey “good ole boy” cracker attorney who represented Rawlings. The lawsuit became an international spectacle and a personal struggle between the two attorneys. “Judith and I realized that many of our students may not be familiar with Rawlings, so we are thrilled about the possibility of creating a literary renaissance of her work through this production,” Haynes continued. “We’re doubly thrilled that our students will be able to observe the process of producing the play, to watch an open rehearsal with a question-and-answer session, and to attend a discussion with local attorneys about this fascinating case and how our laws have evolved. These are the kinds of discussions that college students crave—intellectual conversations that evolve into passionate opinions about the world we live in.”

With a long career in daytime drama, Chapman is well known for her roles in “Ryan’s Hope,” “General Hospital,” “One Life to Live,” “Days of Our Lives” and “The Young and the Restless.” She has appeared on television in “Murder, She Wrote” and “Magnum, P.I.” and in several feature films. Her directing credits include “Jekyll and Hyde:  The Musical,” “Equus,” and “Born Yesterday.” In 2007, the National Academy of Television Arts and Sciences honored Chapman for her 25 years in the industry with a Silver Circle Award. She has taught at the College of the Desert in Palm Desert, California, and is the founder of “The Troubadours of Daytime,” a theatre company that utilizes the time and talent of its members to perform and raise money for groups such as Kiva.org, an organization that makes small loans to people around the world. “Invasion of Privacy” has won awards in New York City; Ashland, Oregon; and Palm Springs, California. Playwright Larry Parr received a Florida Individual Artist’s Fellowship for his work on the script and Director Judith Chapman won Outstanding Director of a Drama-Professional in the 2014 Desert Theatre League Awards in Palm Springs.

Eve Curtis of the “Sun Herald” has called the play “a creative treasure” and a “riveting story.” Jean Reed of the “Pelican Press” says “Intensely interesting, sharply directed and performed, ‘Invasion of Privacy’ is a winner.” Jay Handelman of the “Sarasota Herald Tribune” observes, “Parr has a flair for sassy humor and for focusing his story on the main issues.”